Update On The Tucson Plant

There are some things we feel God is emphasizing among us and we have agreed to pursue as a family of churches during this next season.  Three of those things are:

1. We have agreed to extension through breakthrough and mission.

2. We have agreed to emphasize, equip, and release more supernatural life in and through our churches and regions.

3. We have agreed to base our work on Apostolic prayer.

Here is an update on the Tucson plant: 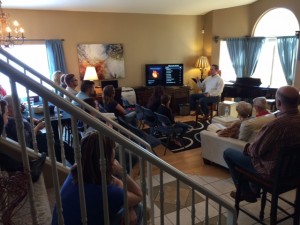 Great news to report from Tucson Arizona: We have officially started gathering in our home just 3.5 months ago and we are almost bursting at the seams. The Lord is establishing a strong group of disciples.

Historical insight:
The Lord gave us a word when we first moved here through a father in the faith that I have known since I was a young man. He told me that he saw that we would not need to invite anyone, but The Lord would do the inviting. And that is what The Lord did through a young man that I have been discipling.
I meet weekly with a young man that I believe has a primary leadership call on his life. I have known this young man since he was around 8 years old. During one of our conversations he just broke down and said he was ready to embrace the call of a God on his life. To signify this decision he asked if I would baptism him. I told him I would and I proceeded to ask him to invite anyone he wanted to the event. When all was said and done he invited over twenty family members of which Janet and I knew personally and who knew why we had moved back in Tucson. By the end of the baptism the people attending were calling it a church service so I asked them if they wanted to do another worship/church service like this again? They all said yes…and so it began.
(A large part of these people had been apart of the original Tucson church plant and yet they are all hungry for the Kingdom of God and ready to build again. It is so exciting!)

We have seen The Lord be so faithful to these people. From salvation decisions to the Lord engulfing us with His presence at the first note of the piano each meeting, The Lord is testifying of Himself.
There is a running joke among the ladies here: they tell any woman that is invited “don’t wear any makeup”…knowing full well that due to the overwhelming presence of The Lord they will inevitably cry it all off.

As more of an outreach and entry point into the local church family we have recently secured a facility to begin having a monthly Saturday evening worship event. This will allow us to begin inviting others who might be uncomfortable meeting in a home.

In our efforts to determine a name for this people we have spent weeks finding the right name that defines what a god is doing. Thanks to the creativity of Laurette Fisher we have come to a decision. The name of the church is a very contemporary name but holds a lot of meaning for us. The church will be named “Verge Church”. This word means: “at the point at which something happens”. It’s original use was defined also as the 12 mile radius around the Kings court and finally “at the extreme edge of something”. All these describe what we are about here in Tucson.

We are excited to see what God has planned for 2015 and we believe that ‘we are at the point at which something happens’ here in Tucson.

Thank you for all the prayers and concern for us. We love you all!